Located more than 50km from Hanoi,Duong Lam is located in the town of Son Tay, Hanoi is a famous tourist destination of Hanoi. This is the first ancient village in Vietnam which was awarded the National Monument of National Cultural Heritage in 2006. With features of architecture and art of an ancient village in the Red River delta, It can be said that the ancient village of Duong Lam just behind Hoi An ancient town and Hanoi old town in terms of scale as well as artistic values ​​make this place become a highlight of tourism in Hanoi. In addition, this is also the land of the “local spiritual masterpiece”, the only place “one of the two kings” – the birthplace of King Phung Hung and King Ngo Quyen, it is also associated with historical and cultural relics. Confucius makes visitors once also want to visit.

The article below will introduce and guide you to visit the Lin Ancient Village during the day, as well as share useful information about this destination. 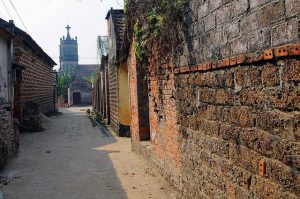 Where is the village of Duong Lam?
Duong Lam is a commune in Son Tay District, Hanoi, on the southern bank of the Red River, next to National Highway 32, at the crossroads of the Ho Chi Minh Highway. In the West and Northwest, Lam road borders with Cam Thuong commune (Cam Gia Thuong), Ba Vi district; southwest to Xuan Son commune; Thanh My commune on the south; in the South East by Trung Hung Ward, in the East by Phu Thinh Ward of Son Tay Town; The North borders with Vinh Phuc province, the main boundary is the Red River.

Because of its favorable location, it is easy to move from Ha Noi to Duong Lam Ancient Village.

Historical Village of Lam Street
Duong Lam, the name of the name called Ke Ke. This name starts with the name Cam Price (sweet sugarcane). The ancient price was divided into two subgroups: Cam Ha Thuong and Cam Ha, in which Cam Xieng was the commune of Cam Thuong, Thanh Lung, Binh Lung … (now Ba Vi district); Cam Ha is nowadays Duong Lam commune. At the beginning of the nineteenth century, Duong Lam was the capital of Son Tay town. The area of ​​the ancient village is now the capital of the villages of Mong Mong Phu, Dong, Cam Thinh, Doai Giap and Cam Lam are next to each other. These villages are interwoven into one area so they have the same customs, customs and beliefs. 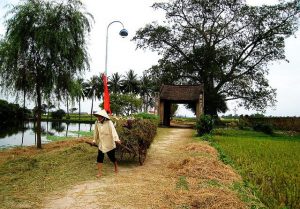 Architecture of the ancient village of Duong Lam

The old village gate is located in Mong Phu village, facing southeast, is a two-storey house located on the way to the village, next to the tree more than 300 years, water landing, lotus pond … create an intact landscape. Rare to date.

The streets are built in the shape of a bones with many small lanes with the Mong Phu hamlet of the central area, with this structure if going from the family will never turn back to the Holy door. This structure also creates a large space in the center of the village, where cultural exchanges, traditional festivals take place on holidays, Tet … And this structure also makes the inhabitants of the village have lip safe living. 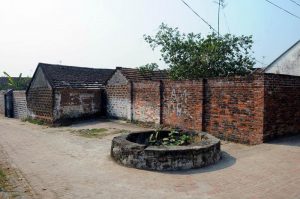 Duong Lam ancient village has a total of 956 ancient houses, located in Dong Sang, Mong Phu and Cam Thinh villages. There are many houses built from a long time, from 1649, 1703, 1850 … are built with traditional materials of Doai: bee, bamboo, clay, clay, husk, sawdust, …

The house is usually built with a model of 5 or 7 times, attached to the house is yard, garden, kitchen, horizontal house, wells, breeding facilities, room, tall, straw, gate roof.

In addition, the village of Duong Lam also has a system of churches, shrines, restaurants, pagodas, ancient wells … located in a lively and rich landscape environment has formed an interesting landmark for the land Son West and Hanoi.

Guide to the Road
With a location close to the highway and about 50km from Hanoi, there are many ways to get to Lin Road during the day.

Bus
You can go to Duong Lam with the following bus routes:

See also: Huong Pagoda Travel Experience
Self-sufficient
From Hanoi, riding motorbikes, bicycles or cars to Lam Street is simple and easy. There are two paths for you to choose from:

From Hanoi follow Thang Long Avenue to Hoa Lac T-junction, turn right, follow Route 21, go through Son Loc to intersection with Road 32, there is a signpost to the village of Lin Road.
From Hanoi to Nhon, follow the road 32 to Son Tay town, crossroad intersection with road 21 will turn into the gate of Duong Lam village on the left hand side.
If you feel unsure, just go to Shanxi town to get to Lin Road. Anyone can show you.

Lam Village Ancient Tourism
Mong Phu Village Gate
The most ancient of Duong Lam is located in the architecture of the village gate and Mong Phu. The village gate is converging with cultural architecture with ancient arches, ancient stone. The village has 5 gates, one big port and four gate towns. At present only the gate of Mong Phu village was built in 1833, on the title of the word “the great rest”, temporarily understood that “every time there are talented people.”

Mong Phu village
Dinh Mong Mong was nearly 380 years, bearing bold imprint of the architecture of Vietnam – Muong: wooden floor with wooden floor, simulating the architectural style of the floor. It is said that this is a flower of architectural art, these unique talents are also stored on the station and the rest … Sophisticated in each dash, but also extremely delicate in Master plan is macro.

Legend has it that: Mongolian auxiliary placed on the head of a dragon that the village well is two eyes. In front of the house is a large yard, this yard is the place to perform the game when the village into the crowd. The courtyard is lower than the surrounding ground, which seems to be a paradox over modern architecture, but it is actually an old-fashioned idea. When it rains down, the water from the three sides rushes into the yard (the water runs down the valley), hinting for the aspiration for a warm life. Then the water slowly escapes under two small sewers running along the armpit (remotely torpedoing), from a distance looking back, in the rain two gutter draw two dragons both real and virtual, indeed an idea. Extremely romantic of the ancient architects.