History by the past times: When human self drawing, history of the (Section 1)

From the inside, in the museum, or on the cliffs … are hidden vestiges, secrets or miracles that humanity has created. Man has been given by the gods to draw his own heroic history: the achievements and the way they have gone through there, in the nourishment that God has for mankind.

Original art: rustic as they are, simple, pure, with pure faith in God.

Human society was primitive, each time with its own characteristics. 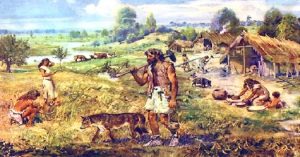 Starting with Stone Age, including Stone Age, Middle Stone, New Stone. This period, in general, man made tools from the simplest, the young, immature in nature, but pure, pure and faithful to God. The vestiges of art began to appear.

One of the most distinctive art of this period was the cave paintings, painted in the shadow of the cave. 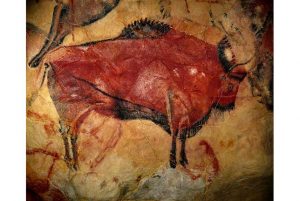 Painting in Lascaux cave
In general, because of the simplicity, the cliché, the painting depicting this period of history is not seriously depicted. But what they want to send is not real, but the meaning, the meaning of the surrounding events in the way people see it. Neolithic stone, tools production techniques, ceramics production, housing construction, civil society development …

On the artistic side, though uneven across the globe, there are also common features such as: small rock formations, realistic animal pictures, simple human figures, rustic artwork The decoration on the products is very developed.

Then Bronze Age: Occurrence of slavery, forming class states such as Egypt, China, Mesopotamia. A new material quickly penetrated copper and brass. The arts began to grow stronger with faith and beliefs.

And to the Iron Age: The appearance of iron, which speaks of technical development and metallurgy. The society is divided, producing wars. Typical for this period was the Hanseatic culture (Austria), which expanded extensively into Central and Southern Europe (10th to 5th centuries BC) as art treasures.

Timely ironwork
A unique group of monuments are silver barrels used for religious ceremonies. We can see the close link between art and spirituality.

The finest artwork of this period was dedicated to the spiritual ritual with the special reverence that the devotee gave.

Ancient Oriental Art: The Imprint of the Old Civilization of Humanity …
It is commonly referred to as Egypt and Mesopotamia in the ancient East. Today it only means that the remnants of Roman, Egyptian and Mesopotamia are the two provinces in the Eastern part of the Roman Empire.

But later excavations (from the 19th and 20th centuries) show that the ancient East was not the only two, but also Paletxtin, northern Syria, central Asia, eastern Urar, the ancient Caucasus, the Iranian highlands (Elam), the regions along the Indian River, and ancient China.