On these emote, prehistorical times, he remarkable propertes of lacquer, a resin exsuded by certain tees common in the hilly reions of some asian countries have probably been econized and put to use by men. The lacquer became a utility lon before givin birth o a form of art.

Where did lacquer originated first is a subject of scholarship dicussions tained with nationalistic price. China and Japan both claim he anteriotity. Historians tended to conside that China is a more probable cadidate. Besides, the Japanese insisted that the lacquer art has developed genuinely in Japan independently from any chinese influence and legends set its begginins in the 3rd century BC during the regin of Empeor Koan. 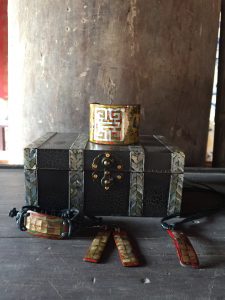 Lacquer use or art in Vietnam claims more modest beginnins. If we believe popular history, it can be pinpointed to the year 1443, thanks to the introduction in Vietnam of chinese technicaques by Tran Thuong Cong, a mandarin iving during th regin of emperor Le Nhan Tong. The Emperor had sent him to China as an ambassador and there, Tran Thuong Cong managed to steal the secrets of the craftmen and artists working at the chineses emperor court. Upon its retun he created a school in his naïve village of Binh Vong, province of Ha Dong, sbout twenty kilometers from Hanoi. It is said tha a temple there still commeroates its memory.

While the history is most propbaly true it probably hides a moe ancient orgin: in 196, archeolgical investigations onducted in Viet Khe, a suburb of Hai Phong have excavated several boat-shaped monoxyle coffins which have been dated by the radioactive carbon 14 method to the end of the 4th or the beginning of the 3rd century BC.

Vietnam had been under the influence of China for nearly a thousand year from the 1st to the 10th century: it would have been extremely surprising that none of the chinese technicques of lacquering did not find its way to Vietnam. Temples wee adorned with lacquered statues and wooden altars, doors and other architectural or ritual ornaments. Most Chinese or Sino-Vietnamese mandarins who ruled the country looked at Peking as the center of Culture and were familiar with the luxuries of the emperor court. Chinese porcelains for example are common in Vietnam and have been of the lacquer art, specially with the best lacquer trees growing on their own native soil!

It more reasonable to think that acquer was used in vietnam routinely and uninterumply from ancient age but that it may have not reached a high level of artistic development or had decined when Tran Thuong Cong revived. It could also be that Tran’s major achievement has been to open a school and to spread a knowledge which could very well have known only at that time by a small class of craftmen jealous of their skills and secrets and althouh there is no actual mention to think that they were.

In any case, lacquers flourished in Vietnam. During the 15th and 16th centuries the still existing Nam Ngu street (now Hang Son) had made its speciality to cater for the lacquer trade. Craftmen could find here anything they needed for their work. In this street, close to the small lake which lays at the heart of Hanoi and borders the Old Town, stood intil recently a small temple dedicated to the proective god of the lacquerers.

Lacquer is a value material in the life in general and in creating art in particular. It will get recognition well beyond Vietnam and will be critically appreciated and cultivated abroad. It would not be surprised that many foreign artists adopt it-if thay can get the materials-and that it become an intenationally accepted and recognised form of art, on a par with oil, acylic or water painings.

Vietnam is the only country which has develed lacqur painting to the stage that it goes beyond decorative art and has become a means of expression on the same level than oil painting for example.

It is quite typical that Vietnamese lacquers are ofen ramed. They enclose an universe of which they constitute the center, on which the viewer has to concentrate. They are not an accessory, a part of disply, they are the one and only atatement. That makes the Vietnamese lacquer paintings unique. It has an universal appeal and one should not be surprised if from its Vietnamese craddle it expaned to lare horizons and becam a world wide accepted media. If that happen, special acknowlegment should be given to the provotal and crucial role of these first generation of Vietnamese students of the Indochina School of Fine Art of the 30’s who have given the art its status and have made it recognized through their life work as a beautiful, flexible and powerful technic.

The Vietnamese society has always been rigidly codified by traditions and rituals which enslave the individual as much as they support and comfort him. He lacqueres society did not make exception and craftmen were due to abide by many rules and obligations. The crat was mostly concentraded in villages ans heeditary. The trainin period was very long and secrets were transmitted under oath from fathers to sons, never to be divulge to straners. Once on his own the craftman could establish himself in other part of the country or go to he emperor cou: he would never severe the links with native village, would send back part of his earnings and retun at least once a year for the celebration of the traditional lacquer festival.

The lacquered artifacts developed progressively from the temple adonements, ritual objects and royalties’ furniture to household iterms and all kinds o objets of native peiple. The decorative form was various. The range of decoratives sujecs for exanple was typically chinese: dragons and other mythical animals, sybols of long life and happiness, chinese chaacters, flowers, stylised or old men with long beard ight out rom the chinese patheon or from known chines legends.

The true revolution in Vietnam lacquers can be dad with precosion to the year 1924. This yea saw the establishment in Hanoi of the “Indochina School of Fine Art” (Ecole des Beaux Arts in French) which was to nutue several enerations o Vietnamese artists and to become the craddle from which were to emere he first and mos talented Vietnamese lacquer painters, found fahes such as Nguyen Khang, Nguyen Duc Nung, Nguyen tien Chung, Bui Trang Chuoc, Nguyen Van Binh, Pham Van Don ect.

Indochina School of Fine Art was established by the french adminisration in 1924, as said that before ad its first diactor was,until his untimely death in 1936, the painter Vicore Tardieu. He brought the students a perfectority artistic educaion in the then popular “ Ecole de Paris” style, without uprooting them from their ancesral Vietnamese sources.

The merging of two cultures if it can give marvellous offspring, drives moe frequently the artists into a state of cofusion where they oscillate bewteen two irreconciliable poles and shift from one kind of superficiality and imitation to another in a vain attempt to cinciliate irredecutible expessions. Mr. M.J. Inguimberty deserved credit for finishing the state of cofusion. He had an important role in creating a modern school of painting. In 1934 Indochina School of Fine Art opened the lacquer section which received additional impulse when Victor Tardieu was sucessed in 1936 by the sculptor Jachres, provied quickly to be eventually the moe sucessful.

The unique chaacteristic of the Vietnamese lacquer is its three dimensional structure. Layers after layers o colors are superposed and revealed only after delicately abrasing the surface. This sanding and polishing give the technique its often used french name of “lacquer poncee” or “sanded lacquer”.

At the beginning the palette was very limited with only two basic colors, black and brown to which could be added some red. Gold was used on application on the finished picture, not coverd by lacquer. In 1932 Tran Van Quang used some sand, later on replaced by gold power, to obtain yellow. Other colors and processes followed: eggshells and mother-of-pearl incrustations, gold and silver as background for tansfarent colors, ect…There is among Vietnamese lacquers a strong tradition of technical and innovation which is still going on, although most of them today use industial pigments which offer a pracically limited choice of colors.